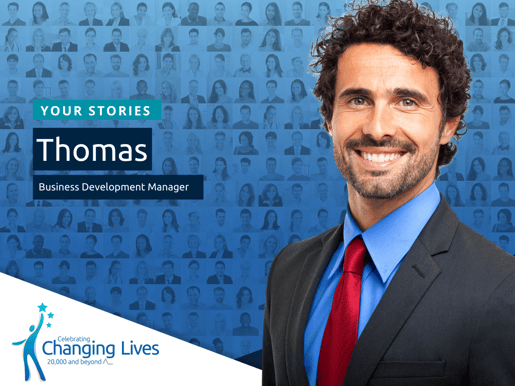 Thomas' Story is brought to you by Stefanie Maras

"Thomas initially applied for a Business Development Manager role but when I sat down with him during our first interview I thought that he had a lot of transferable experience and had a clear capability in the mining and industrial space. While I was talking to him, I noticed he’d be a perfect cultural fit for another partnered company of mine. They didn’t have a role at the time but I told him when they did I’d put him up for it.

When they did have the right opportunity for him, by the first formal interview he was in."

The company called me an hour later and said he’s definitely it - it was that simple and easy. He was the loveliest guy and on his first day he sent me a text saying ‘you were right, I’m so glad you placed me in this business, this is the business for me.’"

"He has a nice approach, intelligent very well structured and customer focused. While not having mining experience, the company saw that he was the right long term cultural fit. The company were very keen - ‘yes, we must have him’."

"He had the right transferable skills and I was able to pitch him on his capability."

"If they're a good person and they’re quick at building rapport with you and if they share the same values with your client, it will generally work out."

"I think he was just a patient person and he kept checking in regularly in a polite way with me because he understood that my job is not just about serving him as a candidate but creating a long term solution for both parties. He was also quite realistic and structured - and very appreciative as well.

Improving their life is what you intend to do and it's nice when someone even sends you a quick text message or a phone call to say thanks very much.

There’s lots of hours in recruitment trying to map out the candidate and the client and match them to each other while negotiating and then getting them the start. There’s lots of steps in the process and sometimes it's just nice for someone to come back and show appreciation for you as well."

"It’s only be a couple of months since he started and feedback from the client has been really positive; they love having him

there for developing the team and his personal performance is great and their clients love him, so it’s very good."